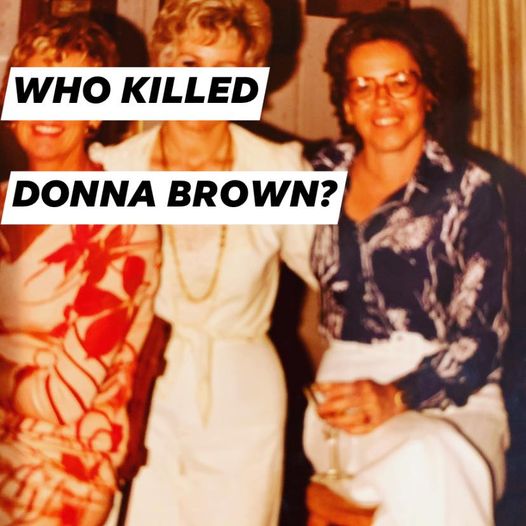 Donna Brown walked into the Alcoholics Anonymous building in Galveston to prepare for the meeting she planned to host that afternoon, and was murdered.

It was an AA volunteer who found Donna laying in the doorway. The 79 year-old was still alive. The volunteer called 911.

“She’s laying here motionless and there’s blood on the floor,” the caller told dispatch. The caller initially thought Donna had slipped and fallen. When paramedics arrived, Donna still had a faint pulse. EMTs loaded her into an ambulance and when they cut away Donna’s shirt, they realized she hadn’t fallen. She had been stabbed. In Ohio, Elizabeth Rogers got the call about her great-aunt.

“How anybody could stab somebody that many times and make them look like that? How somebody could do that – to put them through so much pain,” says Rogers. “She just looked grotesque. Such a beautiful woman and she looked so incredibly awful.”

Rogers bought a plane ticket to Texas and less than 24 hours later, she was standing in the ICU, saying goodbye to the woman she had been in awe of her whole life.

Donna had been the “cool aunt.” She was a Pan Am stewardess in the sixties, jet-setting all over the world. She never married and lived in West Palm Beach for most of her life. Rogers says Donna made money in stocks and investing well – progressive for a single woman at that time. But, about 20 years ago, Donna made a bad investment that changed her life, Rogers says.

“She lost all of her money. She, instead of filing bankruptcy, she just paid everything off and started over. She came out here and she pulled herself up by her straps,” Rogers says.

When Donna lost that money, she moved to Galveston and lived modestly.

“It’s such an amazing story of how you can make it work. She didn’t bring in a lot of money each month. Very little, actually,” Rogers says. “She didn’t care about the material things. Her focus was on helping people.”

That’s what brought Donna to Alcoholics Anonymous. She organized a “women only” group that met Sunday afternoons at 4 p.m. and women showed up week after week. They grew to depend on Donna.

Grainy surveillance video from an apartment complex across the street captured the last moments of Donna’s life. It’s never been seen by the public, until now.

The video shows 3:43 p.m. when Donna pulls up in her white hatchback. Two minutes later, you see her cross the street. She walks through the mint-green colored side door of the AA building on the corner of 33rd Street and Avenue P . After Donna walks in, you see the door open a second time.

“You see what appears to be a struggle in that doorway, ” says Detective Michelle Sollenberger with the Galveston Police Department. “Then, the door slams closed. And we know that Donna was found by her associate at the AA Hall right inside that doorway.”

Why would anyone want to kill Donna?

She was known as a feisty woman. Police say some fellow group members described her as “cantankerous.”

“Donna was known for running men out of the meeting hall for the women’s meeting on Sunday afternoon,” Sollenberger says. “Everybody said: if there was a man in that meeting hall, Donna would have run him off. She would have probably been hollering at him and telling him to get out of there. Unfortunately, this person has a very volatile temper and snapped.”

Donna isn’t the only one seen on that surveillance video. So is the killer, detectives think.

A person is seen entering the other side of the AA building, two hours before Donna showed up. He appears to be wearing black or dark jeans and has on a backpack.

This is what sets Donna’s unsolved murder apart from other cold cases. Detective Sollenberger thinks she has the murderer: she just needs more evidence to connect the dots.

One man may be the key to solving this. We’ll call him Scott. That’s not his real name. He didn’t want to be identified, because the killer is still out there. Scott says he’s sure he was face-to-face with Donna’s killer hours before she was murdered.

In the surveillance video, you see Scott ride up to the AA hall on his bike, 26 minutes after the first man walked in. Scott parks and goes into the brick building.

“When I went inside, there was a gentleman that was passed out-not passed out, but he was laying on one of the benches inside,” Scott says. “My bag was next to him as was all my stuff. The bag was opened and all my stuff-everything had, you know-somebody had gone through my stuff.”

Scott says he and the man got into it.

“This gentleman sat up and said, ‘I went through all your stuff to make sure there wasn’t a bomb in it.’ And he just kind of did a little chuckle and it really got me hot, you know?” Scott says. “This guy is an intimidating guy, kind of a scary person. He’s a big guy. He’s young and probably twice my size and he’s fit. He (was) just really aggressive, very animated, very aggravated.”

Scott grabbed his bag and got out of there. Surveillance video shows him inside for a total of two minutes. You see him ride off on his bike 90 minutes before Donna arrived.

A couple days after her murder, Scott worked up the courage to tell police what had happened.

“He was able to identify the person as somebody he knew from the meetings. But, the nature of the AA program is to be anonymous, and so, a lot of the individuals don’t know each other,” Sollenberger says. 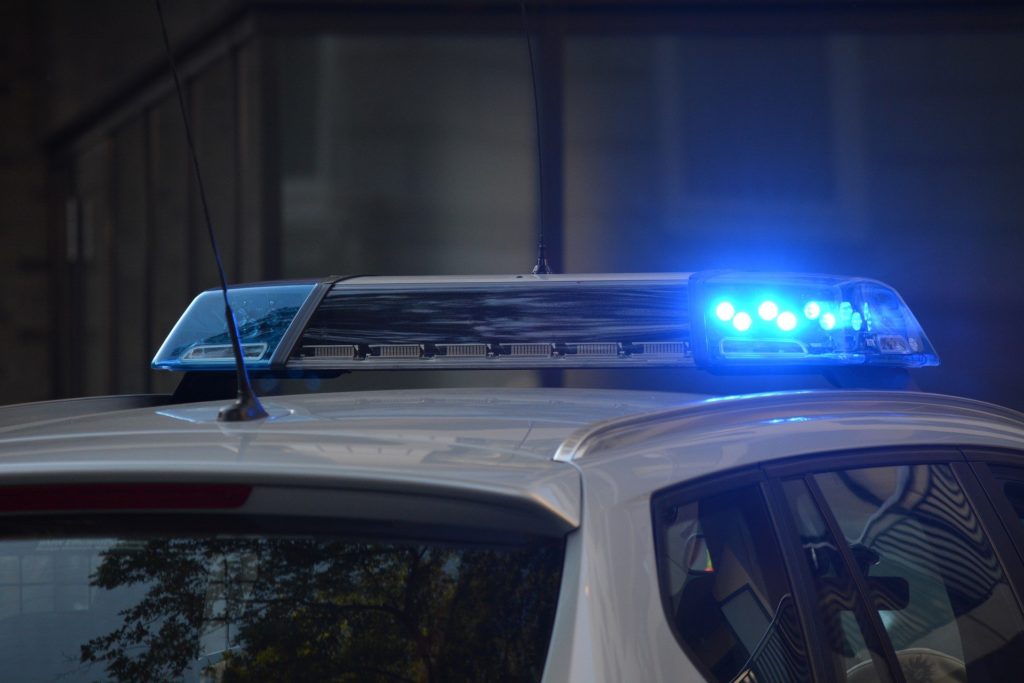 That made Sollenberger’s job harder but not impossible. She tracked down the person Scott says he thinks he spoke with in the AA building before Donna was attacked. Sollenberger had to figure out: was he the killer? Was he the man in the video wearing black pants and the backpack? We’re not naming him because he’s not a suspect. He’s a person of interest.

Two days after Donna’s murder, the man was arrested on an unrelated warrant. Police collected his clothes and shoes. CSI techs sprayed a special liquid called Bluestar on the man’s tennis shoes. The liquid glows blue under a blacklight if someone’s DNA is present. His shoes lit up. But, testing at the crime lab can’t confirm whose DNA is present.

“It was really frustrating because we thought that bloody shoe was going to be the missing piece of our puzzle.”

Weeks passed-and then, another break. A neighbor living near the AA building called police with new surveillance video from his Ring doorbell. It showed a man with dark pants and a backpack coming from the direction of the hall, five minutes after Donna was murdered.

Sollenberger released that video exclusively to ABC13, hoping someone sees it and can identify the man by name.

“I think that would be the linchpin in this case,” she says. “We’ve exhausted the forensics and we have essentially run out of leads because of the anonymity involved in some of the witnesses and people involved in the AA hall.”

A few months away from the second anniversary of Donna’s death, Elizabeth Rogers flew from Ohio to Texas again, to visit the AA building for the first time.

“It’s a little surreal. It’s good though. It’s really good,” Rogers told us. “It brings it all back. It makes me want to resolve this for her.”

Rogers met Scott, who says he thinks about that day every day.

Before he met Donna, Scott had been struggling to stay clean. Now, he has a job, he has a home, he has a life-he says it’s all thanks to Donna:

“God brought that lady to my life. That was not by mistake. That happened for a reason. She’s a hero to me. I don’t even know her. But she kept me praying and that’s what’s kept me alive.”

Since the pandemic hit, Sollenberger says she’s had more time to work on cold cases like Donna’s. But, interviewing people in person can be tough with a mask.

Coronavirus stopped AA meetings in Galveston for a while. Donna would have struggled with that.

“She was just the person who happened to be there. It would have been anyone who walked through that door,” Sollenberger says.

Someone knows who killed Donna Brown-knows why it happened and where the murder weapon is hidden.

“To believe the suspect didn’t tell somebody is a little farfetched. I think he had to have relayed this information to somebody at this point,” Sollenberger says.

Donna’s family is asking for your help. Because that’s what Donna stood for: she helped people who, in many cases, didn’t have anyone. Donna wouldn’t let them be forgotten.

If you have any information about Donna’s case, or, if you can identify the man by name wearing dark pants and the backpack in the Ring video, call Galveston police at