The Flactif case: An investigation solved with Bluestar

At a crime scene, he makes the bloodstains talk

“When I entered the Flactif house, I immediately noticed the traces of sponge strokes in the small living room and suspected that the chalet had been cleaned thoroughly. “Warrant Officer Philippe Esperança, 39 years old, will never forget this 18 April 2003.

A French specialist in the morpho-analysis of bloodstains, he had to wait his turn to go through the house with a fine-tooth comb: “We only intervene when all the other findings are complete. “ 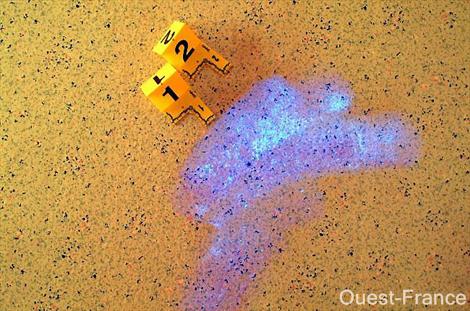 The result was worth it. “Like at every crime scene, I sprayed our usual product, Bluestar. Its great quality is that it leaves the DNA prints intact,” explains Philippe Esperança. Another advantage is that it allows us to work in semi-darkness, whereas previously we had to work in total darkness. In three days in the chalet, the analysis of the few visible traces of blood and the use of this chemical revealed five bleeding sites – as many as there were victims – and one storage site. “The hypothesis of a quintuple murder on the spot was emerging. “From that moment on, my gendarme colleagues stopped looking for the Flactif family elsewhere than in Grand-Bornand. “

DNA analyses showed that among the bloodstains, some of them tiny, there were those of the five members of the Flactif family. But also traces left by employees or visitors to the chalet in recent years. Plus two unknown DNAs. One was David Hotyat’s.

Since helping to solve the Grand-Bornand mystery, Philippe Esperança has lectured around the world and worked with the Americans at the FBI. Trained as an entomologist (study of insects), he was a naturalist at the Jardin des plantes before becoming a gendarme. After three years of training in Canada, he created the blood trace morpho-analysis service at the IRCGN (1) in Rosny-sous-Bois in 1999. And as the previous chemical products did not suit him, he developed Bluestar himself. “This product went around the world in one year. It is so powerful that DNA has been identified on machine-washed clothes and in a high-pressure kitchen. “The oldest blood trace found in France in a criminal case was 17 years ago.

About 100 cases per year

Philippe Esperança can give you a lecture on the difference between the shape of degraded blood traces (when a hand has moved them from one place to another); passive blood traces, due to gravity, and projected blood traces, when a force – that of the aggressor – is added to gravity. “As the blood sprays quite far, these analyses can allow us to calculate the trajectory of the blow, the position of the victim or the aggressor, the nature of the weapon used, the distinction between a blow and a shock, etc. “During a suicide in a cornfield near Toulouse, specialists had found drops of blood carried by insects.

The week we met him, Philippe Esparança had three crime reconstructions on his agenda, including one in Guadeloupe, and two testimonies in a criminal court. “Our colleagues in the gendarmerie, and even the investigating judges directly, call us on about a hundred cases a year. “But the gendarmes are not there “only” to serve the prosecution. Warrant Officer Esperança remembers concluding that a drunkard had died in an accident after falling on a bottle of champagne. In March 2005, before the Nantes assizes, his expertise also contributed to the acquittal of Joaquim, a young man accused of the murder of a friend. “For us, it was a suicide. “

The scenario of what happened on April 11 at the Flactif’s chalet is being confirmed, written by the investigators according to the confessions of suspect n°1, dissatisfied tenant, shuffled from one flat to another by his landlord. Well decided, his scenario in place, David Hotyat enters alone in the chalet between 18h30 and 21h in the kitchen where Xavier Flactif and two of his children are. He fired his 6.35 revolver. The mother hears the shots and is shot as she goes up the stairs. He shot the last child upstairs in his room, he would have told during his hearing, it is there that the investigators find the most clues: blood, pieces of teeth, and a shell of the revolver. It is on this order of the victims that David Hotyat contradicts himself, suggesting that there are still grey areas. He explained that he then burned the bodies of Xavier Flactif, his wife and their children in a forest in the region, after having loaded them into a vehicle and driven 10 km away. He then returned to Grand Bornand, seemingly out of the blue, making up a story to explain their disappearance.

How David Hotyat was identified

The Gendarmerie’s criminal research institute was dealing with traces of blood in the empty Flactif chalet, traces of blood that had been washed away. In spite of everything, the scientists of the gendarmerie first managed to identify the origin of this blood, it belonged to the five members of the Flactif family, and then very thorough analyses made it possible to establish that the blood of several of the members of the family was mixed with another blood, another genetic trace, it is this genetic trace, this DNA belongs to David Hotyat.

It is because this DNA was found mixed with the blood of several of the victims that the gendarmes, before the arrest, were already convinced that the owner of this genetic trace was the murderer. It was thanks to this DNA that the gendarmes were able to trace the case. Since May, the gendarmes have taken DNA samples from 130 people, business relations, craftsmen and people close to Flactif. This is how the investigators were able to target the main suspect.

David Hotyat was confirmed by DNA samples taken from nearly 130 people who had relations with Xavier Flactif and his family, or who lived in the region. David Hotyat’s genetic fingerprint matched the mysterious sixth DNA found in the chalet alongside the fingerprints of the five family members. The property developer, his wife, Graziella Ortolano, and their three children were last seen on 11 April in the late afternoon. Investigations found multiple traces of blood belonging to the family members, a shell casing and splinters of teeth in their cottage. Blood also belonging to the missing persons was found in Xavier Flactif’s vehicle, abandoned near Geneva-Cointrin airport on the Swiss side on 13 May.

According to Alexandra Lefèvre, Hotyat told her that he had first shot two children, alone at the chalet, then their mother, the last child and finally the father. As he was cleaning up the traces of blood, with a flashlight in his mouth, Hotyat, overcome with nausea, was disturbed by the call of a tenant of Flactif and then the arrival of a pizza delivery man…